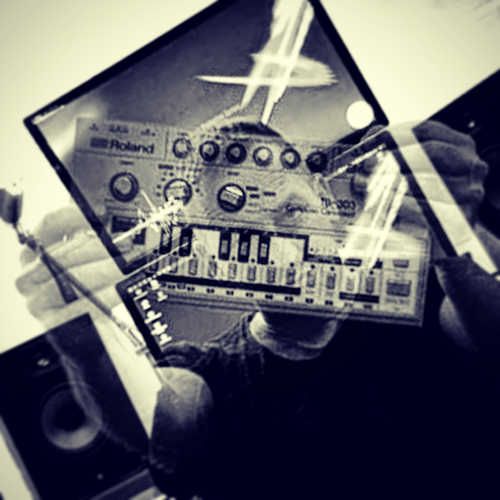 Tonetrax is a one-man project that was originally started almost 30 years ago, back then under the name „SYcroz“. Over the years „Ton[E]“ was added, which stands for the name of the artist („Tony“) as well as for the sound.

Unfortunately, the rather complex spelling „SYcroz&Ton[E]“ resulted in a problem (ever tried to write that with a cell phone without switching the keyboard 100 times?). And the pronunciation is anything but clear.

To keep a part of the original name and keep it short and concise, the project „Tonetrax“ was created, which still stands for the artist as well as the soundtrack.

The music genres are somewhere between techno, house, trance, edm, pop and all genres in between. 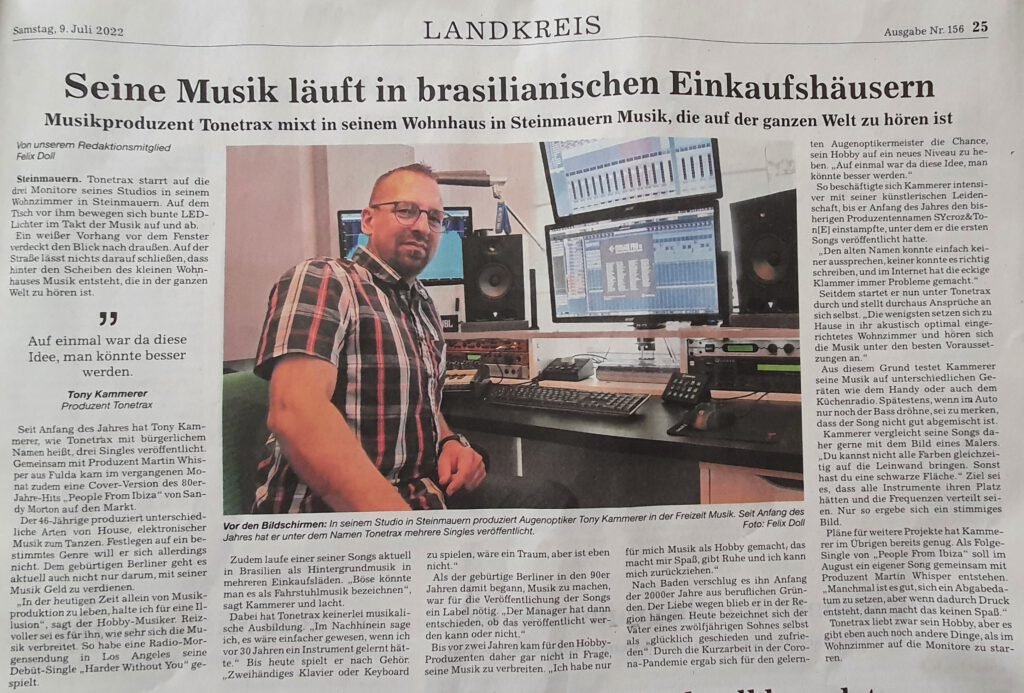 Tonetrax stares at the three monitors of his studio in his living room in Steinmauern. On the table in front of him, colourful LED lights move up and down in time with the music.
A white curtain in front of the window obscures the view outside. On the street, nothing suggests that music is being created behind the windows of the small apartment building, music that can be heard all over the world.
Since the beginning of the year, Tony Kammerer, whose real name is Tonetrax, has released three singles. Together with producer Martin Whisper from Fulda, a cover version of the 80s hit „People From Ibiza“ by Sandy Morton was also released last month.
The 46-year-old produces different types of house, electronic music for dancing. However, he does not want to commit himself to a specific genre. The Berlin-born musician is not only interested in earning money with his music.
„In this day and age, I think it’s an illusion to live from music production alone,“ says the hobby musician. For him, it’s more exciting to see how much the music spreads. For example, a radio morning show in Los Angeles played his debut single „Harder Without You“.
In addition, one of his songs is currently playing as background music in several shops in Brazil. „You could call it lift music,“ Kammerer says and laughs.
Yet Tonetrax has no musical training whatsoever. „In retrospect, I say it would have been easier if I had learned an instrument 30 years ago.“ To this day, he plays by ear. „Playing two-handed piano or keyboard would be a dream, but just isn’t.“
When the Berlin native started making music in the 90s, a label was needed to release the songs. „The manager then decided whether it could be released or not.“
Until two years ago, therefore, distributing his music was out of the question for the hobby producer. „I only made music for myself as a hobby, it’s fun, gives me peace and I can withdraw.“
He moved to Baden in the early 2000s for professional reasons. He stayed in the region because of love. Today, the father of a twelve-year-old son describes himself as „happily divorced and content“.
Time spent on short-time work used for hobbies
Short-time work during the Corona pandemic gave the trained master optician the chance to take his hobby to a new level. „All of a sudden there was this idea that you could do better.“
So Kammerer occupied himself more intensively with his artistic passion until, at the beginning of the year, he stamped out the previous producer name SYcroz&Ton[E], under which he had released the first songs.
„Nobody could pronounce the old name, nobody could spell it right, and on the internet the square bracket always caused problems.“
Since then, he has now taken off under Tonetrax and certainly makes demands on himself. „Very few people sit down at home in their acoustically optimally furnished living room and listen to music under the best conditions.“
Tonetrax has many ideas for new projects
For this reason, Kammerer tests his music on different devices such as the mobile phone or even the kitchen radio. At the latest, when only the bass is booming in the car, it is noticeable that the song is not mixed well.
Kammerer therefore likes to compare his songs to a painter’s picture. „You can’t put all the colours on the canvas at the same time. Otherwise you’ll have a black surface.“ The aim is for all the instruments to have their place and the frequencies to be distributed. This is the only way to create a coherent picture.
Incidentally, Kammerer already has enough plans for further projects. As a follow-up single to „People From Ibiza“, an own song is to be created in August together with producer Martin Whisper. „Sometimes it’s good to set yourself a deadline, but if it creates pressure, then it’s no fun.“
Tonetrax loves his hobby, but there are other things than staring at the monitors in the living room.“